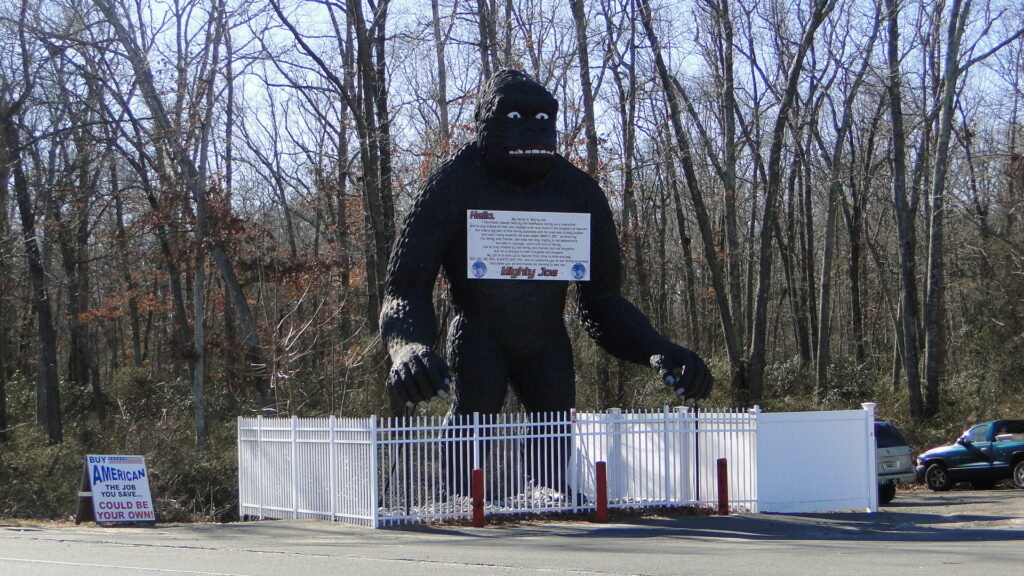 The Story of
"Mighty Joe"

Outside Wildwood in 2003, he tottered on broken feet. When we first saw Mighty Joe he was named “George” and he stood 25 feet above a South Jersey go-kart track. Others knew him from even earlier times, when he towered over the beachfront boardwalk in Wildwood, New Jersey as “Kongo-Pongo” and “Magilla.”

George was in sad shape when we first met, pitched forward onto his mighty gorilla fists because his feet had buckled in a storm. Larry Valenzano noticed George while driving on Hwy 47 to and from his Wildwood beach house. The gorilla, he said, “Always reminded me of my son.”

The younger Valenzano was a former body builder nicknamed “Mighty Joe” who died of a brain tumor in 1999. Larry and Barbara Valenzano, heartbroken, renamed their gas station “Mighty Joe’s” in their son’s honor. Then they bought the big gorilla to serve as a memorial and a mascot.

“My wife thought I was crazy,” Larry said. “She told me, ‘That guy’s not gonna sell you that gorilla. You’re out of your mind. What makes you think he would sell that to you?'”

But the guy DID sell Larry the gorilla, bypassing 15 higher bidders. “I don’t need the money…” Larry remembered him saying at the time. “…and the reason you want it is more important.”

It almost didn’t matter, because while Larry was figuring out how to ship the gorilla to his gas station, someone showed up at the go-kart track and tried to steal it. “I think they were from a mini-golf course in Ocean City,” Larry said. “The owner chased them off the property. They probably would have painted it pink.”

Larry finally figured out how to haul the gorilla cross-state, and after six months in a repair shop, Mighty Joe was unveiled in 2004. It cost Larry five times as much to fix him as it cost to buy him. But that was still peanuts (or banana chips) compared to the $50,000 that it originally cost to build the gorilla in Spain, according to what Larry’s heard.

The gorilla stands on the south side of the gas station parking lot, inside a white metal fence, his scowling mug set against a backdrop of South Jersey pine trees and blue sky.

Joe is looking spiffy these days — his eyes, mouth, and even his fingernails have been given fresh coats of paint that gleam against his flat black fiberglass fur. A hole in his chest, which once held a rickety sliding board on the Wildwood boardwalk, has been covered with a sign:

Hello, my name is Mighty Joe. My job is to look up to heaven from time to time and say:

“HEY, JOE, WE WILL ALWAYS LOVE YOU”